So having been given 6 steroids to go with the Chemo on Monday and taking another 3 yesterday, I was on a bit of whizz in the old brain department.  Sadly, the body was feeling like it did not want to comply.  The body wanted a sleep.  The brain had a list of things that needed to be done.  The brain won.

I did actually sleep through until 3.30 am this morning.  This is a lie-in!  The pain woke me up.  The pain is from the aspiration - the bruising is just coming through now, two weeks on.  That's the bugger of cancer.  Everything takes so long to heal.  Pain combined with steroids also makes you a little emotional and I have taken to having the occasional teary moment.  I am resolving to stop right this minute, as self-pity is not getting stuff done.

I stupidly read the side-effects bit of Eribulin yesterday.  Why do I do that to myself?  A bit like the beginning of Three Men in a Boat, I am now really disappointed because I don't have ALL of them.  Neither do I have the pancreatic cancer I was worrying myself about.  In fact, I am really quite well - just the cancer slows me down a bit.  Can I resist thinking that the tingling in my toes is a side effect, when it is just that I have had my legs crossed for too long?  No.

I was chatting to the Dad of a child who is also immune-suppressed at the moment.  It is hard for her.  She can't go to school much because of the risk of infection and finding motivation to do more than play Grand Theft Auto 5 is just too much.  I am quite tempted to go over and play with her.  Sounds ideal to me but no life for a teenager.  Sometimes I forget that other families are going through hell too and not just in my weird ED world.

HWISO gave me an iPad for my birthday which I am still trying to come to terms with.  I belong to a chatroom for the Mod Squad and, if I access it via my iPad, it randomly decides I have done enough "chatting" and "leaves" the room.  We decided it must be a teenage iPad and needs me to find it shoes, do a load of emergency washing or needs money for something.  Two nights ago, it was so determined for me to leave, it looked like I was throwing a hissy fit and slamming the door....

My Mother in Scotland's case is progressing but I am losing faith in the NHS Complaints System now.  A letter headed

was apparently perceived by the Chairman and Chief Executive of Ayr & Arran to be a request for help to get this case resolved quickly, not as a letter of complaint.  It was only passed on to the complaints department yesterday as a Complaint Letter and they are asking for 20 working days from then to investigate.  Hmmm.  Perhaps not?  I think we have been fudged around enough on this case.  MiS is still trying to deal with a child who cannot eat, a child who is terrified of being an inpatient in hospital again after 3 traumatic experiences on a general ward in the past 2 years, PTS for the whole family and a long, long road to recovery and restoration.  Throwing starfish is all very well for me to do but I have to make sure I am throwing them far enough, with enough food and water for them to thrive.

The good news is that the school nurse, who covered the child's mouth making personal comments about her teeth, WHILST WEIGHING her, has not been seen for a while.  I am glad that such a nasty, spiteful and destructive influence on vulnerable children seems to have run for the hills.  As she appears to have been instrumental in instituting pointless and groundless Child Protection hearings against MiS, I hope she is suffering from constipation as bad as mine AND boils on her bottom.

See why I can't switch the brain off?

To cheer myself up, I have been chatting with Livs in Australia this morning, distracting her from her studies (ironing hands, Livs).  I thought I would just post a photo of her because she is a shining beacon for what recovery looks like and the fact that it means you can travel across the world to stay with a mad woman your Mum met on the Intrawebz and be safe..... 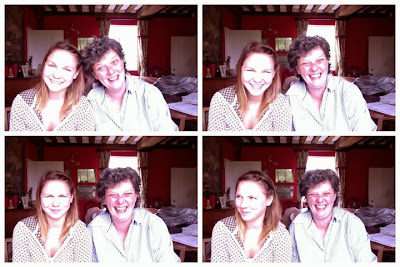