I may be "off the grid" a bit this later this week and would not want to induce the volume of emails and messages that came pouring in last Friday when I had a lie in and was a bit mouldy.

HWISO and I have bought a house in Southwold and are due to move in on Friday. Qualify that, we haven't bought a house.  We have borrowed an eye-watering, heart-stopping amount of money to invest in "the most expensive house ever" (HWISO quote), as a business.  Being farmers, summer holidays are not on the agenda, so we will be letting it out over the busiest (and most expensive) summer period and, hopefully, other weeks of the year.  Having done a grown-up Business Plan, with the help of the Nicest Bank Manager in the World, we have carefully done Projections and Forecasts and all that sort of thing.  Hopefully, it will pay for itself.

More importantly, although it has a name and number and everything, it is henceforth knows as the Mental Health House (MHH).  We live and work on a family farm, which is lovely and very Waltons but sometimes everyone needs to just get away and have a break.  The house in Southwold means that HWISO can just pack up himself, the dogs and the golf clubs and go up there for a couple of rainy days in November without having to worry.  We know so many people in and around Southwold.  There are something like 13 restaurants, 15 pubs, a fish and chip shop, a chinese take-away, lots of lovely food shops (greengrocer, butcher, bakery) and fish straight off the boats in the harbour, the beach hut, fishing from the beach, the tennis club, the theatre, the cinema and a host of like-minded people.

Tiff and Ali are coming to help me unpack, which will be more than helpful, considering my present "restricted access" issues.

The house is very modern - a bit of a new experience for HWISO and I.  We have never lived in a house with double glazing before.  Our winters have always been spent wearing scarves to protect ourselves from draughts and two pairs of socks because no one has a door that fits properly right?  Our house is some 400 years old and breeds spiders, dust and some kind of unidentifiable brown stuff from the sole plate, which I think is something to do with the ants that nest there.  We have had hornets in the chimneys, death watch beetle in the attics, the morning we found the furniture floating in the sitting room, when the floor gave way.  We have windows that don't open and windows that don't shut and windows that are not sure which camp they want to be in, depending on the humidity.  We have a downstairs loo that freezes if it gets too cold, along with a header tank that does the same.  And then there's the back door. 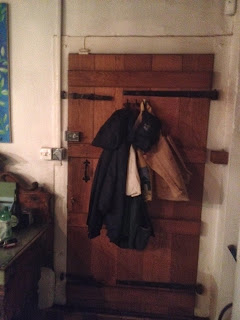 As you can see, it is not the normal "buy-off-the-shelf" size.  When the old back door (estimated to be at least 300 years old, patched up and overpainted) finally died some 15 years ago, we had to have a new one specially made.  It is made of oak, has the original fittings from the old door and a yale lock which turns the wrong way because HWISO bought one that was supposed to go the other way round. Rather than take it back and change it, he turned it upside down, so you now have to lock the door to unlock it.  The ever practical farmer.  Because we are listed, we had to have the door approved by the listings wombles and get permission and have it inspected by the council droids.  Sigh.

Anyway, one morning I came downstairs, opened my beautiful (and wildly expensive) new door.  If you look just to the left, where the light switch is, you can see the wall. Well, that just fell down when I opened the door. Literally. The dogs and I were very confuzzalated for a few seconds but I swiftly shut the door in the hope that it would hold the rest of the wall up - it did - and called the builders.  Lots of acro props, dust, noise and confusion and a new built wall (which also had to be inspected by the droids and wombles) and things got back to relative normality.

The new house is wipe clean.  Lock and go.  Everything works.  Everything has a place.  All the furniture going up is wipe clean.  So it may be the most expensive house ever bought but it will also be the easiest to keep in relative order and I won't have to do the bleach/wirey thing.....

Some things are too hard to resist - a rather boring picture of a door has to be countered by Laika and her gorgeously pink tummy. 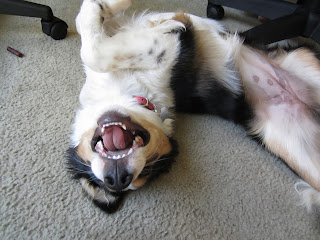