Moving with Darby and Loan


So now the lorry is unpacked and we are in a frenzy to get the empty boxes back on the lorry. Frenetic ripping of tape and waving of those snappy black gloves and we manage to get most of them done before the blankets are re folded and strapped up. A last cup of tea for Steptoe and sons, a run up to town for a sandwich, which morphed into a delicious picky salad, bread, ham and yummy pots of things lunch and long conversations with HWISO about our £10 Tescos phone being dropped off with Julian on his way up and Tiff and Ali were gone.

The silence settled. I was waiting for HWISO and the dogs, the John Lewis lorry with the beds and for the reality of the fact that we had somehow bought our own house in Southwold to hit me.  I shuffled around those gloves, which Ali had left as a stark reminder by the shiny taps in the kitchen. I went to restlessly doze on the sofa.

HWISO arrived with the Labradors. Pirate had "opted" to stay behind with the girls. Trouble went ballistic round, sniffing and wagging.  Uhu wagged gently in his "I've done this before" way, then lay on the sofa and slept, snoring gently beside me. 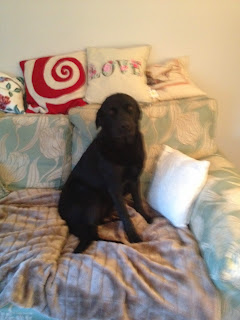 HWISO grinned his way round the house, making lists of things to do.  I pointed out that it was Southwold so that all the shops were about to shut.  So, if he wanted anything he ought to get a move on. Trouble settled and slept.

I spent a long time looking for the phone point

The beds arrived.  We ate. We slept.  With a huge smile on our faces. We made it.
Posted by CHARLOTTE'S RANT at 10:18