Once again, I need to reiterate

Do feel free to comment on Linked In, if you are a member:

The Fairy Blogmother asked that we be polite and respectful.

Charlotte Bevan I am only wasting my time commenting on this thread because people should know that the world is round, America has a black president and parents don't cause eating disorders. Ask any expert in the eating disorders world.


But I do have to say that I love Tom Insell

Dr. Thomas Insel responds From: Insel, Thomas (NIH/NIMH) [E] Sent: Sunday, November 07, 2010 4:51 PM To: M.B. Krohel Cc: Laura Collins Subject: Re: Current status on the field of Eating DisordersDear Ms. Krohel,It is indeed frustrating that so many professionals continue to promote a “blame and shame” approach to people with mental disorders. This is especially unfortunate in the treatment of eating disorders, in which the “experts” have long blamed parents, while recent evidence demonstrates the effectiveness of parent-centered treatment (see attached from Locke et al), suggesting that parents may be the solution not the problem. Families and people challenged with mental disorders increasingly find reassurance in the emerging research that addresses these as brain circuit disorders (see attached from Scientific American) but many professionals, who have no training in neuroscience, still find a neurobiological approach to mental disorders as misguided and frankly alien to all of their experience. You may want to watch Good Morning America tomorrow. Congressman Patrick Kennedy is scheduled to be interviewed about his campaign to reduce stigma of mental disorders by framing these illnesses as brain disorders. Perhaps, as you quote in your e-mail, this effort will fail, but in an earlier decade, focusing on the medical basis of cancer and AIDS helped us out of the blame and shame phases of these disorders.Sincerely, Tom InselThomas R. Insel, MD Director, NIMH/NIH/DHHS 1. Executive Blvd. Rm 8235Bethesda, MD 20892
Posted by CHARLOTTE'S RANT at 19:00 2 comments: 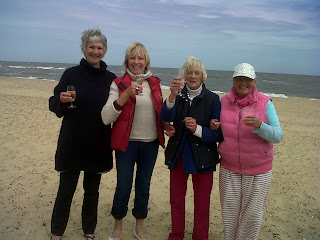 They swam in the North Sea nearly every single day for 5 years.
(Picture by kind permission of Alice E)

Auntie Charl getting all proud

A short (1.5 mins) video from the Royal Opera House.  My niece is the first "Italy" singer.  Rock n Roll, sweetheart

During Eating Disorders Awareness Week, get together with work colleagues, friends or family to fundraise for Beat and help us support people affected by eating disorders and their families, friends and carers.

How will you wear yours? Here are some ideas to get you started:
We would love to hear what you're doing, email fundraising@b-eat.co.uk or call 01603 753336 and don't forget to send us your pictures for our Sock it to eating disorders photo gallery!
Posted by CHARLOTTE'S RANT at 15:09 No comments: 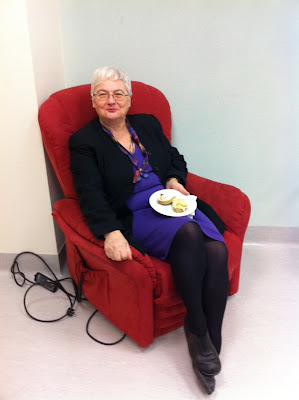 Many many whoops and snoopy dances for a great clinician, mentor and good friend, Professor Treasure, on being awarded an OBE for her work.

I am honoured to call her my friend and have assured her I will buy a new hat, if she will let me come to the Palace with her.  To date, she hasn't taken me up on my offer but where there's a will, there's a way.
Posted by CHARLOTTE'S RANT at 14:45 2 comments:

My good friend, Batty Matty, has got a new book out available here.

We have been friends for a while now, having met through the Around the Dinner  Table forum and I am so proud of how hard and long she has fought for her boy.

Please remember to review the book on Amazon, when you have finished reading it and please tweet and share.

The Good, The Bad and the darn right Ugly

Three pieces in the press recently.

Major Changes in Eating Disorders Diagnosis on the Way

I am just open mouthed at this.  You can buy a bulimia machine...

Perhaps if this idiot, a self-styled Marxist proletarian firebrand (or failed Will Self wannabe?) had read the Huff Po EDNOS article, before he published this (Clue: always wise to do your research, Mr Idiot), he wouldn't be looking like such a prize dickwad now.

Just saying.
Posted by CHARLOTTE'S RANT at 14:14 No comments:

I think it's wrong.  If you do too, here's the petition

Just sign it.  Children with obesity problems do not need to be put on television and ritually humiliated. They need proper physical and psychological care.
Posted by CHARLOTTE'S RANT at 18:20 No comments: