Well the theory about the children being at home disturbing the dogs was obviously wrong, because 4.30 am found me hanging around the back door, iPad in hand, chatting to E who is on her way to Paris for a couple of days, waiting for the return of Uhu from the depths of the orchard. 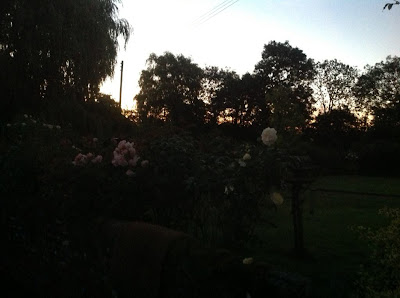 I had such a cathartic day yesterday, with Fifi and slept the sleep of the just for the first time in a long time.  She has three girls of similar ages to my two and HWISO, her and I were in hysterics about some of the similarities.  We were, of course, all three convinced that we were much nicer, more polite, better dressed (cue track suit rant but coyly admitting to wearing them ourselves "in the evenings when it's cold" but "never to the supermarket") and better at entertaining ourselves than our teenage children.  We had less clothes, less "toys", no mobiles and were much less selfish and more helpful.

Complete tommyrot, I suspect but being a parent, with no one to contradict you, gives you the right to look back on your former selves with rose tinted glasses.

When someone faces a problem with you, rather than for you, it is actually quite a relief.  Between bouts of giggling - I am still laughing that someone could recognise you across the street in Amsterdam by dint of your chesticles... - and lots of wide-eyed "He didn't"s, we got in the important stuff.

That was the point of yesterday though.  The rose tinted glasses didn't have to be put on for Fifi.  She had obviously thought and assimilated my situation and had questions she wanted to ask and she asked them.  She asked them in a quiet way, with deep affection and didn't cry.  I was able to answer them in the same way and, most importantly, the stuff left unsaid was completely understood.

I probably need to explain that I am not good at praise or admiration.  I was bought up in a very Victorian way, where any type of praise was meagre and thinking about one's self or one's achievements in anything other than a "modest" way was instantly condemned.  Ergo, when people tell me I am brave or doing really good work or that they love me and they don't want me to die, I am secretly pleased ..... for about 30 seconds....and then overcome by discomfort and guilt.  I am just not got good at it.  I tend to vaguely hand wave off "emotional" stuff in, often, a very flip and sometimes, unknowingly cruel, way.

I then got to the computer and an email from Selina.  We both ended up agreeing that being 21 was all very well, but wish we had enjoyed it, without the angst.  She managed to dig up a photo of me at that age. 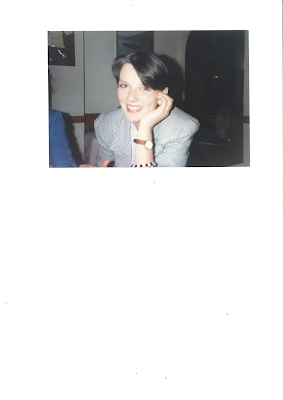