Thought for the day

"In the end, only three things matter: how much you loved, how gently you lived and how gracefully you let go of things not meant for you"

I usually get slightly squirmy at all those "empowering" slogans that pop up on my Facebook Wall.  As for the cancer ones, tinged with pink and "Cancer is beatable.  Look at me in this aeroplane doorway in my tutu!" stuff - well, they have me running for the smallest room.  I often feel the same about the ones that relate to Eating Disorders - all the "You can do it if you just learn to love your body" stuff.

This one, for obvious reasons, sang to me though.  I think what really touched me was the idea of gentle living.  A place of kindness.

As some of you know, I am a Moderator on the Around the Dinner Table forum, which is a peer-to-peer place for advice and support for parents and carers of children with eating disorders.  It started off really small and intimate and has evolved over time to become an international community.

And there's the rub.

The more well-known we become as a resource for parents and carers, the more vulnerable we are to "attacks", not from spammers and such like but from people within the eating disorders world, who do not agree with parental involvement, or refeeding or the Maudsley Method, or believe that their eating disorder is their choice and their identity and we are overbearing parents and all the other non-evidence based psycho-babble that comes out.

They have their own communities on line, where they meet and shoot the breeze.  I have had to (and it was very distasteful) track some of these communities when various members turned up on the forum, with "tall tales" of "adopted" children with eating disorders that they suddenly found themselves caring for and what should they do?  To those of us who have been around for some time, there are obvious "flags" and "markers" when someone is pretending to be something else.  However, if they stay within the rules of the forum, then they are allowed to continue to post their problems, albeit in the third person.  We try not to judge them and respect their "story".  We have been wrong sometimes - one mother we were all convinced was posting a false story, was posting about her daughter but had had an eating disorder when younger herself, so her way of describing was very "sufferish".  I talked to her on the phone and she is now a valuable member of our community.

The problem with sufferers posting on the forum is that they drop into a community of parents, who are on the steepest learning curve, dealing with a potentially dying child, with little support or knowledge and scant resources, who have screwed up every inch of courage to ask for help from a load of strangers on the internet.

We try to keep the forum a gentle and kind place.  Of course, we have disagreements.  Of course, we all have different ideas and viewpoints.  We are parents.  We pool our resources and we try and help guide parents through this firestorm as gently as we can.  Sometimes it works, sometimes it doesn't but we set out with the best of intentions to help and empower, not undermine and accuse.  I take it personally when people deliberately lie and manipulate vulnerable people, even if they are vulnerable themselves.  I want to live in a kinder world.

Kindness breeds kindness, in my experience.

Finally, a picture of our sky last night and a beaut from my brother.

Timothy James Bethune Wills I'd like to just get one of those pink clouds and put you in it and push you around. Great Gatsby. 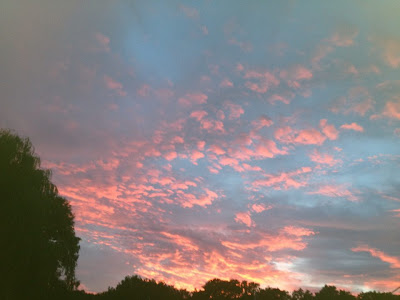