For nurses (but esp. for Rachel!)

So I arrived at the hospital and went round to see my lovely radiographer.  She is not a nurse.  She is a grown up radiographer.  We tried to get a picture with ultrasound of what was going on in my now huge, red, painful shoulder - huger and redder and more painful than it had 24 hours previously, when an aspiration was considered a necessity.

Unfortunately the dressing, covering the two holes where the needles had gone in on Tuesday, was stuck down with tape that I had, overnight, become allergic to. Literally overnight.  I have had the same tape applied to dressings over 30 times on that shoulder for aspirations, on the numerous blood tests I have done every week, over the chemo port hole.  I have never got blisters from it before.

So I went over to the Day Unit, by now in tears with pain after a bit of poking and prodding and fell on the wonderfully calm Jules, the receptionist, who stroked me gently, gave me a bed and went to find help for me.


In the shape of Helen, my clinical care nurse.  Now to be fair, Helen does work on the Ward and on the Day Patient unit occasionally both to "keep her hand in" and to help out when they are really busy.  But, frontline, hands-on nursing is not her job.  I am not in the slightest bit bothered by this.  I love Helen, trust her and tease her mercilessly about various procedures - some of us patients know OUR  chemo routine better than the nurses unsurprisingly.  And Gill.  The other clinical nurse on the team, who is also a good mate.

So the first priority was to get bloods done which, for once, all went smoothly.

The next priority was to get the dressing off the blistering skin and see what was going on.  I suggested tap water and was met with rolling eyes and mutterings of "sterile" so a quick raid of the Supplies Cupboard was in order.

So picture the scene.  I am lying hunched in pain on the bed surrounded by incontinence pads to soak up any drips, with Helen and her trolley full of blood taking equipment on one side, wearing plastic apron and gloves and Gill on the other, also booted and suited and a bag of sterile saline drip.  I did make a comment about "rubbing salt into the wound" which was met (again!) with rolling eyes.  Our next problem was how to get the saline out of the bag, with no sterile scissors.  Both Gill and I suggested a sterile needle - Helen had lots of those.  So she (with our encouragement) stabbed the bag two or three times with the sterile needle and duly squeezed the bag over the taped area to wet the plaster to remove it more easily.

What ensued reduced us all to helpless giggles - nay, hysteria.  The water went everywhere from its holes BUT on the plaster - all over Gill, all over me and at an interesting angle into Helen's midriff.  Eventually with much more laughter, much more water and woggling and wiggling of the saline bag, we managed to wet the plaster enough to get it off.

Now, in case any of you to think to judge either Helen, Gill or I, or our professional competence or our practicality and lack of foresight that this might happen, you would be wrong.  The endorphins released by laughing so hard that I had to go and wee, was WAY better medicine than any of the other stuff that they injected me with later.

And I love them both for making such a miserable morning turn into an afternoon that I was out of pain enough and relaxed enough to sleep for a couple of hours whilst waiting for test results and the chance to outargue Dr W about not having another aspiration and being allowed home.

I wouldn't have my care by the wonderful MacMillan Day Unit any other way.

Photograph: what a port looks like and how it works.  The port is under the skin so you can't see it.  The yellow thing is the butterfly on the back of the needle.  It doesn't hurt when they put the needle in - or certainly hurts considerably less than a "normal" blood test and it doesn't hurt AT ALL when they take it out.  I have been known to take my own out...... 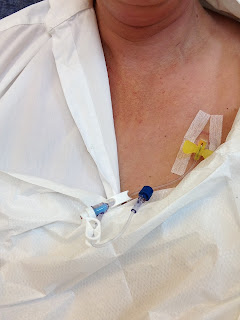