So what is the psychological impact of intensive treatment for a life-threatening disease/disorder in a clinical setting?

MF covered some of it here.  But psychological damage is a very personal thing. Nobody could possibly begin to understand what goes on in another person's head, however well you know them.  The psychological impact of physical treatment on a life threatening condition is as individual as we are all.  People deal with things in different ways and have different coping mechanisms.

Would I, as a cancer patient, advocate for other cancer patients' psychological wellbeing, based on my present physical condition and psychological state - ie terminally ill with no hope of recovery?  No.  It is not my place to think that my experience is the only experience that matters; that my fears are everyone else's fear; and that my family is the same as everyone else's.  That makes me both arrogant and not an individual.


I got involved in an interesting debate on Facebook yesterday about the psychological impact of initial treatment in a hospital setting.  Needless to say, it was about eating disorders, specifically anorexia and refeeding for the first few weeks and calorie intake.  It is all a bit technical for those of you who are not in this world but was based on this study, which I am very excited about.  Getting nutrition in and beginning to repair the physiological damage of long-term starvation is the most important first step, in my humble opinion.

However, one very vocal Patient Advocate was more concerned about the psychological impact on the patients, than the refeeding.  She even went as far as to call the study "unethical" and claimed she had expressed this view elsewhere (a private forum for members of the AED) to the researchers (Dr. Sara Buckelew and Andrea Garber at UCSF Benioff Children's Hospital).  Why?  Because she felt the psychological impacts on the patient weren't taken into account.

When I was back in the hospital (one of the four times last week!), I met up again with this lady.  She was in the Day Unit to discuss starting chemo this week, having had a double mastectomy, many infected lymph glands removed and an urgent referral because the cancer had spread - all this in less than a month.  Of course, the nurses, the oncologist, the surgeon and her fellow patients were kind and sympathetic and happy to talk and listen.  But, hey, can you even begin to imagine what she is going through?

No you cant.  Nobody can.  How can I possibly even begin to put myself in this lady's head?  I know what it did to the inside of my head and I didn't have a mastectomy.  I know the effects of chemo, both physically and mentally.  I have nearly died from chemotherapy last time round - my heartbeat was in the 20's and it took 7 hours to rehydrate me.

I have lived with the deep burn of radiotherapy that rises from the inside to the out. Towards the end, despite creams and cold packs, clothes become intolerable.

I have believed I was clear of cancer.

I have had to tell my children I am going to die.

Just because Anorexia Nervosa is not able to be seen on a scanner (and neither is cancer growth until it reaches a certain size), I cannot see how this particular Patient Advocate can argue that a slightly higher calorie intake at the outset of initial treatment is "unethical" or more psychologically damaging.  Personally, I would rather my treatment was as fast and effective as possible, especially as it is saving and prolonging my life.  I understand that other people may not feel this way but have yet to find a cancer patient, whose first reaction to being told they had a growth, was not to want to "get it out".

I only wish that I could get my cancer "out" but I would be left with a wound that would never heal.  Anorexia Nervosa patients, properly nourished and properly supported throughout for a long time do get that chance.  So I get snarky when patients, who are still obviously mentally ill, advocate so vehemently and virulently for other patients, against treatment on the grounds that they, personally, would find it hard.  This is not treating patients as individuals but arrogance, IMHO.

I would not have dreamt of telling my lady not to have her surgery because she might find it hard to cope with life without breasts.  It is not my place.  I am merely a peer.

To finish up with a lovely picture I was sent yesterday which really made me smile. You gotta lurve that tongue... 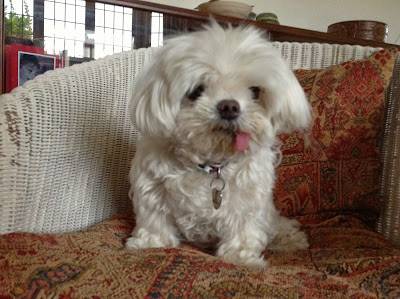