So I am an Outlier and consequently confuzzalating my oncologist.

I think what she said was that one lump hasn't grown, the other lump is so obscured with fluid that I need to have it drained and measured by the ultrasound team (tomorrow morning) and that two other lymph nodes in my chest are giving cause for concern but that the stuff that had spread to my lungs has disappeared and that my other internal bits are all clear too.

Which means it hasn't spread.

From my scan in June, they would have expected it to have spread and it hasn't.  They would also have expected the other one (in my lymph node in my armpit) to have shrunk but it hasn't and the one we can't see is obviously driving her nuts!

The outlier thing is twofold.

Firstly, the fact that chemo doesn't seem to work on me like it does on other people - ie tumour shrinkage.  The most important thing is that this particular chemo doesn't make it grow, which was good news, as far as I was concerned.

Secondly, the fact that my cancer is, for the moment, staying very localised and not spreading, as they would have expected in more "normal" cancer patients at my stage.

HWISO and I held our breath for a long time and eventually asked the "Will I make it to Christmas?" question which has been plaguing the whole family for the whole weekend.

Poor Dr W smiled and said she rather expecting me to still be bothering her in six months time.

It is surreal to be happy about hearing that.  Really surreal.  Neither HWISO or I have talked about this appointment at all, although we have both been having the same thoughts.  We are both rather light-hearted and headed this afternoon, which seems contrary and both feel that I have somehow managed to wrestle an additional couple of months from the wretched cancer.

Who would have known a year ago, that 60 days would produce such pleasure.....

The picture is especially for my girls.  I washed it this morning and, as you can see, it looks a little less "Einstein" when clean, so will continue to do so.  Just because I love you! 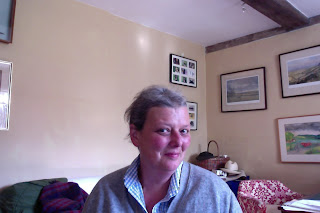