I have rabbited on for years about the importance of carers practising self-care, when caring for an ill person.  Today, I have dispatched HWISO off to Southwold, with the two labs for 24 hours of doing what HE wants (practising his golf swing, sorting out the heating, rearranging the furniture, going to the pub for lunch, watching sport on TV and no-one telling him Country File is boring).  It took me a little while to realise that he needed "permission" to go and so I told him that I was well aware that he needed a break from constantly running around after me and putting up with my steroid-spike snappiness morning, followed by my uselessness due to pain evening, interspersed with napping afternoon routines.

He really needed some cave time and I am glad he has gone (though I miss his solid reassuring presence).

The girls and I will muddle through with Pirate.  The house will be a chaotic tip by this evening and I will enjoy not worrying about supper or going to bed at 6.30 pm, without a major drama.

His parting shot was that he wouldn't be back until about 4pm tomorrow.  I thought that strange.  Then I realised that the wonderful Lynne would have been in by then, waved her magic duster and the house would be gleamingly spick and span.  The girls would have done their shopping and packing and everything would be in the car for the return to school.  I would have had a nap and be moderately pleasant and the evening would be drawing in and he could light a fire and do that caveman thing of bringing in the wood and producing cakes from the Two Magpies.

Sometimes I should give him more credit…. 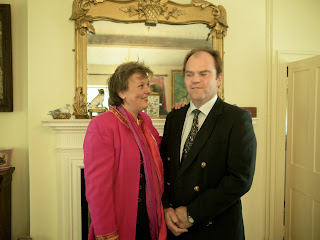