We had the best night evah in Norfolk with Matt and Jane - hilarious, loving and so relaxing.  I love the skies in Norfolk and found myself humming "Don't fence me in".  The food was unbelievable.  Really. We also chose the "wine flight" which was were the sommelier (who was about 15, like all those doctors and policemen these days) recommended and came to tell us about.

I have known Matt for so long that I know when he talks about going "for a walk", he really means going for 5 miles at a fast trot, so I declined to go further than the Quay and watch the boats being launched to catch the tide, yesterday morning.

Back home, through dreadful traffic, a brief hour's sleep and then setting off to Stansted to pick up my big bruvver.  What I love most about Tim is his ability to "take the piss" out of us all and diffuse a teenage slanging match by accurately copying the exact tone and pitch of the voice, so we all end up crying with laughter.

He is also brilliant at computers, erudite and never loses the argument.

My joy was him threatening to "wake up" the girls this morning with a cup of tea and his rendition of Michael Jacksons "Don't stop till you get enough" because Em likes the "Woo" at the beginning.  This was after we thought of making a video entitled "99 ways to say Teenager" having watched this.

I suspect the next couple of weeks are going to be full of laughter and really stupid ideas.  Poor HWISO may miss out as the combine started rolling yesterday, three weeks late. 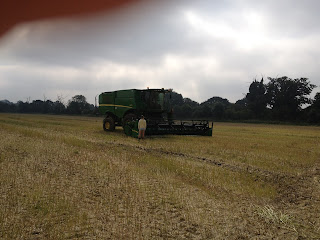 Pic of the wonderful Livs Wright with our combine last year.