I am currently involved in a bit of a debate on my Facebook page about this study.  It is a study that is backing up what many of us parents have been saying for a long time.  Restoring an eating disorders patient to physical health as quickly as possible is of prime importance.  Leaving them starving, underweight and possibly dying, whilst you fiddle around talking about why they are so malnourished doesn't really help anyone.

Stop the bleeding being the idea, rather than go back to the accident site to see how and where the crash happened before deciding what to do.  I still remain haunted by this blog of Julie O'Toole's and particularly by this paragraph.

Or take the story we heard of "an anorectic [sic] person" whose underlying problem was that she identified with her father's cachexia (wasting) as he was dying of cancer. She "recovered nicely," we were told, once this underlying "reason" for her illness had been uncovered in psychotherapy. Groundless claims such as "neglectful parents and bonding disturbances between mother and child," where you could "actually see why the patient became anorectic[sic]," were offered in place of clinical evidence. Lastly, we heard of a patient who was "exquisitely on death's doorstep," having gained no weight after four years of psychotherapy.

How can you, as a clinician, leave someone "exquisitely on death's doorstep" for 4 years, whilst you talk about it?

This is the world where Bunkum & Woo meets Feathers and Beads and people die.  It is a treatment approach that is being robustly defended on my Facebook Wall and I am deeply saddened by it.

So, Super-T sent me a picture to cheer me.  And I LOVE it (as she would say).  You see, there are plenty of other over-sized dogs that NEED the whole sofa, Em and Georgie.  Super T gets to sit on the floor as well.... 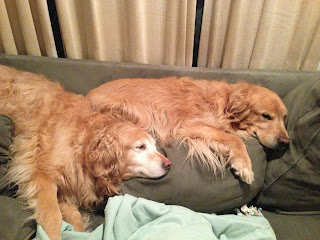