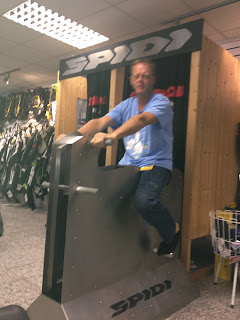 So I took the idiot brother to the local bike shop to get proper jeans for his new motorbike riding/definitely not a mid-life crisis phase.  The bleuch on his ankle is actually quite stomach turning, three weeks on so he needs proper protection.  The young man (why is the world populated by knowledgeable teenagers these days?  Doctors, policemen and now cool kids in bike shops?) who helped us was divine and even got most of our jokes.  He laughed when Tim said that his "dropped" bike was not "damaged" but had "sustained modifications to the tank".....

The t-shirt Tim is wearing is one that Mum gave to all three men (HWISO, Tim and other brother Michael) for Christmas.  It shows the shipping forecast areas on it.  This means much of the day is taken up with intoning "Dogger, Fisher, German Bite, North to North-west, 5, moderate or good".

E and G are "not getting on" just now.  This is tiring for everyone.  Having Tim here is helping a lot.  He does not get "triggered" by the same "nip nip" scenarios as HWISO and I and is able to offer a bird's eye view and some calm.  Bless him.

Yesterday was made mouldy by the fact I had taken piriton (which just makes me sleepy but seems to not have much effect on the allergies) the night before, alongside a co-codamol, which I had forgotten just makes me feel rotten, breathless, tired and doesn't seem to help with the pain.  The pain after the aspiration was terrible and the aspiration doesn't seem to have worked.  Darn.

It was filled with joy with a quick visit from Lickey - yes, that is what everyone calls her, a dear old friend, who is witty, amusing and impossibly glamorous.  She is also married to one of the world's best photographers so gets to visit some really cool places on assignments.

We have talked a lot about raising teenagers.  Tim has 13 3/4 year old triplets.   I have a 16 and a 17 year old.  I think he looks with horror at what is coming, sometimes.  It is weird being the youngest child who had the grandchildren first.  I freely admit to being crap at this teenage thing sometimes.  I just want everyone to be happy and that seems impossible.  HWISO and I are pretty united in our toleration levels and pretty laid back but there are some limits and some lines not crossable.  The girls seem to enjoy finding out our tolerance limits and then making us feel guilty.  I know we are not alone.....

I have also received great advice from one of Mum's Mermaids this morning.  It is so lovely that the friendship bonds tied by mother span across three generations.

So the plans for today are fluid, excepting Tim and I are going to attempt to butterfly a leg of lamb for the barbie.