to not be greeted by the labs wagging and wanting affection when I come down for my 4 am cup of tea.  Pirate is totally uninterested in coming out from under his cocoon of blankets on the sofa and will probably only emerge when there is chance of a Dentastick in about three house time, if James comes up to see me.

It was also weird to be able to turn on the corridor light and negotiate the stairs (piled high with hopeful gatherings of clothes, shoes and files that need to go back to school tonight) with full electricity, rather than by the dim light of the iPhone.

So I guess I am missing HWISO but I am genuinely happy that he is having a break.  He sounded like a new person on the phone last night, despite having got absolutely soaking on his dog walk.

I have been listening with fascination to the stories about the newly discovered art hoard in Germany.  On the one hand, I am delighted it has been found and that the heirs of the original owners should get it back and that justice should be done.  On the other, it is such a sad and horrid state of affairs to bring up again.  To sweep it under the carpet with a "got the criminal in the end and the stolen stuff is being returned" is to miss out the big chunk of horror in the middle and to turn it into some kind of trite "Happy Ever After" fairy story.  However, this is what it is on some levels.  Sigh

So I went to bed early last night, hence why I am awake so early.  I am SO excited as E (the best cook in the world - all of us still salivate over her home-made, chestnut honey ice cream) is coming up to see me today.  I had had to cancel our scheduled get-together next week, because of operations et al and didn't want to press her to come - it is a LONG way from Surrey.  She wanted to come and see me but didn't want to impose.  Luckily, we got it sorted out with a few tentative toe-dipping emails and she will be here soon(ish!).  I have an agapanthus in a pot for her, which needs saving from the frosts and I will giggle as she squeezes it into her immaculate car - she is another Mrs Crispy, who has sheets of plastic neatly folded in the back to protect seats and those carpety things in the footwell.

My car, which I haven't driven for ages, is filthy and awash with empty drinks cans and cartons and the remains of a box of cakes from Valeries Patisserie, as well as a few dog leads, parking tickets, dust and shopping lists.  I have absolutely no intention of cleaning it up and will black out the windows before E gets here.  And Christine, for that matter, who is popping in today as well.

I am doing a good job of distracting myself from the appointment tomorrow by introducing Colleen to Racing Demon via the chatroom.  I can see the Great Pacific Northwest lunches turning into a bit of a bun-fight.

But my heart still stops when I think about what may happen if they can't do this operation.  And what will happen if they do - the cancer may spread more rapidly, the operation may fail, tissue rejection, pain, long convalescence, being in hospital, pooing in a pot…... 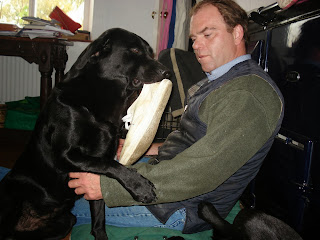 Trouble, a shoe, HWISO and the aga….