So G has a really high temperature and is excessively mouldy.  This means she and I have to be separated.  For the most part, she is keeping to bed and sleeping it off.

It was weird to get up this morning, having got up at 3 am for the dogs, to find that sometime between 3am and 6am, a ghost had come down, had some cereals, watched some TV and disappeared back to bed again (leaving the lights on, the TV on and the milk out!).  It made me realise two salient facts

Secondly: if the girls knew how heavily I slept, they could do a load of outrageous things and probably hold a full on rave, without interrupting my morphine induced slumber.

Whilst trawling for an appropriate cheering photo this morning, I was overwhelmed by the desire to have another puppy when I found this picture of 12 week old Uhu. 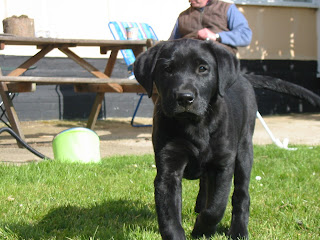 Sophie's husband, H, came over for a coffee yesterday.  We spent most of the time talking about "childcare" arrangements for his little dog, Lily, once the children go back to school and he goes back to work, full-time, in September.  He is worried that Lily will be lonely so my immediate solution was to get another dog.  As this is the first dog they have ever had, I think that suggesting another one may have been a bit overwhelming.

It was nice to talk to H on a peer-to-peer level about medication.  Only he, Mr Practical, could have cut bits off Sophie's morphine patches because they were too strong.  He is the type of person that, when given a pair of scissors, needs to experiment.  I did laugh at the thought of poor Soph, standing there resignedly, whilst H fiddled around with the patch to ensure she was not too "morphined up".

It was lovely to talk about Sophie too and to hear how the children were getting on.  It was lovely to hear that they are indulging Dad by going on a bike riding holiday with him this week, something which Sophie would have loathed.  It gave me a great deal of hope for my HWISO and children's relationship.

Meanwhile, the combine grinds its way through the crops.  It is a weird year where everything is ready at once and we have the luxury of picking a part of the farm to combine and going for it, rather than endlessly moving around, depending on crops and ripeness.  Our problem this year is storage.  I was unamused to hear that we can't move the combined rape just now, because the triticale, combined yesterday, is in front of it.  Luckily, the wheat can stay in the fields for a while, even though it is ripe.  However the barley and the rape need to come in.

Juggling the money (late harvest means late payment) and the slightly shorter fuses during this busy time is not keeping me awake though.

It seems only a dog can do that.