It's been a busy few days on the internet here.

I find it amusing that, when I first started my blog, people liked to remain anonymous.  The Eating Disorders world tends to dwell in some kind of twilight zone of stigma and shame.  Those of us who do step out of the shadows and make a noise are constrained on so many levels - needing not to seem like a screeching hoard of bristly hornets, needing to remain polite and focused on a very emotive subject, needing to rise above the shame and challenge the stigma, needing to make ourselves heard without being shrill but being fearless and challenging at the same time.

We are lucky enough to have great examples to follow.  The parent advocates of the autism world and those of the schizophrenia world have blazed a trail for us.  My friend, FM, was taken aback at a Church Festival this weekend by the support she received when raising a question about mental illness.

Nowadays, people seem to be flattered to be on the blog and even some of my most loyal friends, who trudged through BMI rants, are actively promoting it - Anthony - thanks.  My readership has risen hugely too.  Whether that is the cancer or the parenting or just that people like the ramblings and hope for a mention, I am not sure.  However, I am grateful.

On the note of people on the blog, I did promise my friend, Melissa, a long time ago.  So here goes for a bit of reminiscing and a great photo.

Melissa and I have been friends for so long, it is embarrassing so I won't name any figures but let's just say we did the whole dolls/dressing up/first boyfriend thing together.  There is only one problem with Mills and that is that I am a year older than her, so I always got into trouble for "leading her astray".  I can assure you that she is quite capable of getting into trouble all by herself....

When we were at prep school, I had smuggled in a radio.  Mills was about 10 and I was about 11 and, one wet and miserable Sunday afternoon, we were caught listening to the Top 40 on Radio 1.  Ears pressed against the radio (on Volume 2), we would probably have got away with it, had she not immediately come over all guilty (and probably went red too!).  (Revenge is sweet ....)

The radio was confiscated - I don't think I ever saw it back and it probably went straight into Matron's sitting room, permanently tuned to Radio 3, providing much needed solace for her.

In the subsequent furore that surrounding this "breaking of the rules" and punishment being required - Top 40 records in 1976 were obviously VERY subversive - Melissa was given a lecture about being "as weak as water" for "coming under" my influence.  (I was a troubled child, even then).

I am delighted to tell you that she is not "as weak as water" as the photo below shows.  *I* have never driven the combine on my own - this is not ours, BTW, but is pretty similar - and I admire her for her bravery.  I also admire the farmer who let her drive it, but that's probably a whole other blog. 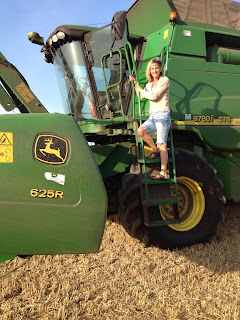